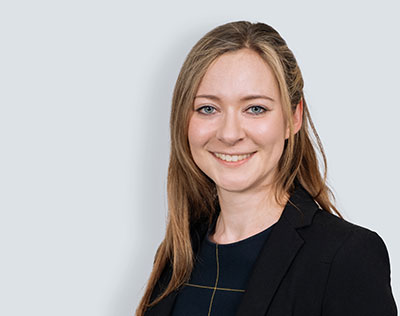 Imogen is an IT & commercial lawyer with a keen interest in all things technology. She advises on commercial law, contract negotiation and UK GDPR data considerations, and has experience of being involved in large-scale contract remediation projects in line with updates in data law and M&A due diligence.

Imogen joined Stevens & Bolton in 2021, having trained and qualified with a transatlantic law firm in 2018.

Prior to joining Stevens & Bolton, Imogen obtained in-house experience as a secondee at a consumer-facing energy supplier during the final phases of its smart meter roll-out. This gave her a unique perspective on the challenges that businesses face when adopting new technology on a large scale, and the additional considerations arising when that business is externally regulated.

Imogen has worked with a broad range of clients from the insurance, financial, energy, media, retail and technology sectors, including FTSE 100 companies and public sector entities.

She has also worked with start-up and scale-up enterprises, appreciating such companies’ unique or different legal priorities in their early stages.

Imogen co-authored the LexisNexis Insurance TMT Outsourcing clauses precedent, and is a member of the Society of Computers and Law. She holds a strong interest in the next generation of business disrupters, and has delivered contract and data workshops for young entrepreneurs for the Princes Trust and Exeter University.