The General Court of the European Union has rejected an application to register a logo which presented the word ‘CANNABIS’ on a background of cannabis leaves. The Court took the view that consumers would perceive the logo as referring to cannabis as a narcotic substance even though the drug is made from the flowers rather than the leaves pictured in the logo. The decision presents a challenge to companies engaged in the growing market for lawful cannabis products, which may face objections to marks if there is a perceived reference to the drug, even if this is based on a misconception.

In 2016, the applicant, Ms Santa Conté, had filed an EU trade mark application with the European Union Intellectual Property Office (EUIPO) for a logo containing the text ‘CANNABIS STORE AMSTERDAM’ for a variety of food and drinks products (pictured as registered). The application was rejected by the Board of Appeal of the EUIPO on the ground that it violated public policy and morality. Conté appealed, arguing among other things that there was nothing criminal about the goods or services, nor the words “Amsterdam” or “Store” and pointing out that it is the cannabis flowers rather than the leaves from which the marijuana drug is made. The General Court, however, was not persuaded by these arguments and upheld the Board’s ruling. 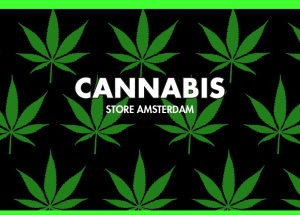 In reaching its decision, the General Court considered the perception of the relevant public and noted that consumers would associate the cannabis leaf with the psychotropic substance regardless of the fact that this was inaccurate from a scientific or technical point of view. The Court also took the view that the inclusion of the word ‘Amsterdam’ was a reference to the city’s tolerance of the use of cannabis and that the applicant was therefore drawing attention to the concept of cannabis as a drug.  The Court concluded that consumers would perceive the sign as an indication that the food and drink items and services contain narcotic substantances, which are illegal in many EU member states. As a result the mark was contrary to public policy.

The ruling poses a challenge to EU companies starting out in the growing cannabis and CBD-products industry. However, as the legal use of cannabis becomes more generally known and more widely accepted, the perception of consumers may change, potentially leading to a more relaxed attitude by the trade mark authorities.