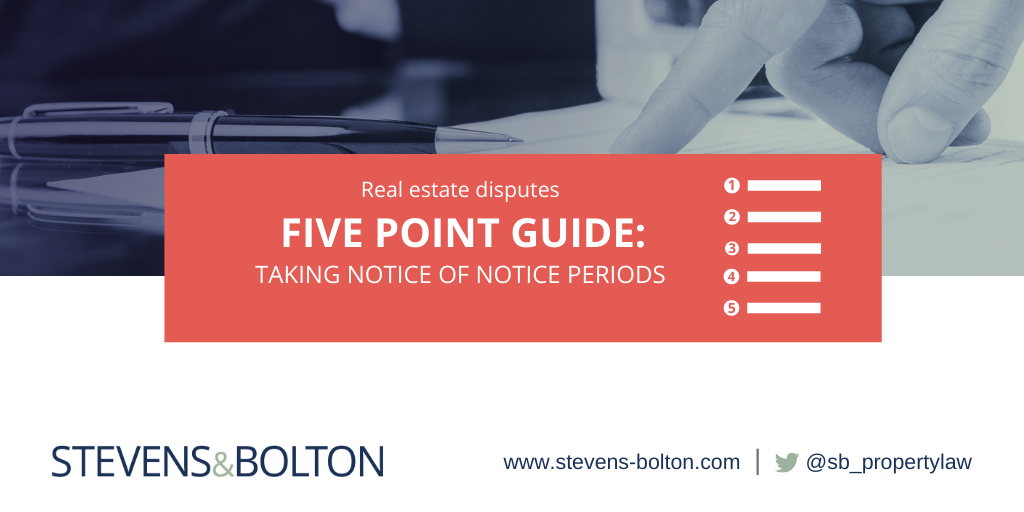 In the current climate, many tenants are understandably cautious about committing to long-term inflexible arrangements with their landlords. We are seeing an increase in occupiers entering into temporary arrangements which allows their business to occupy premises on a more flexible basis while they decide how to structure their requirements for space.

While flexibility is key in such uncertain times, it comes with its own risks, for both tenants and landlords. Tenants may have little or no security for their business operations and there are potential traps for tenants when they decide to exit their premises.

The focus of this guide is the amount of notice which a tenant needs to give to terminate each of the five different types of arrangements for the occupation of commercial premises.

We haven’t considered formal break options as part of this note. Breaks are a complicated topic in their own right and you can find out more about breaks and how to successfully operate them in our earlier article here.

1. Leases inside the Act

The Landlord and Tenant Act 1954 (the Act) provides that tenants who are in business occupation of their premises have security of tenure, unless they have agreed in advance to exclude the protection of the Act.

Security of tenure means that the tenancy will continue until it is determined in accordance with the Act, regardless of the expiry date in the lease. This means that as long as a tenant remains in business occupation of its premises after the expiry of the contractual term of the lease, the tenancy will not terminate and will continue under the provisions of the Act.

In practical terms, this means that if your lease expires on 31 December 2020, then you should vacate your premises before that date in order for the lease to come to an end. This does not mean that a tenant must take every piece of furniture out of the property, only that the tenant is not in business occupation.

If the tenant does not vacate the property on or before the term date and continues in business occupation, then the tenancy will continue until it is terminated in accordance with the provisions of the Act. This is known as "holding over" and a tenant which is holding over must give its landlord at least three months’ notice in order to terminate that continuing tenancy.

Using the example above, if the tenant is still in business occupation on 1 January 2021 then it must give the landlord at least three months’ notice in order to terminate its tenancy. This means that the earliest the tenancy would come to an end would be 1 April 2021.

2. Leases outside the Act

A lease which is outside the Act terminates automatically at the expiry of the term. No notice is required and the lease will not continue beyond that point in time.

This means that a lease outside the Act with a term which expires on 31 December 2020 will come to an end on that date. The tenant will have no right to continue to occupy the premises after that date. If they remain in occupation on 1 January 2021, then the landlord will have the right to take back possession, including re-entering peaceably by changing the locks.

In practice of course, many tenants do continue to occupy premises after the expiry of their contracted out lease and this can give rise to other types of arrangements which are discussed below.

A tenancy at will is a personal arrangement between landlord and tenant where the parties have agreed (either expressly or impliedly) that the tenancy can be terminated by either party at any time. A tenancy at will is a very flexible option for tenants to occupy premises for a short period of time but, where this is done on an informal basis over a prolonged period, there are significant risks that the arrangement could be held to be an implied periodic tenancy (see point five below).

A tenancy at will can be terminated at any time and there is no specific notice period which must be given by either landlord or tenant. Notice of some kind must be given but that could be notice to terminate the tenancy on immediate notice. In practice, many landlords and tenants would give the other party a slightly longer period of time in order to ensure that the tenant has enough time to vacate the premises in an orderly fashion.

It is important for tenants to remember that a tenancy at will is a personal arrangement and not an estate in land. This means that if the landlord disposes of its interest then the tenancy will terminate automatically. Tenants occupying under tenancies at will are at risk in that a landlord can terminate their rights to occupy at any time, but these arrangements are still widely used because of the great benefits that such flexibility gives to both parties.

A licence, like a tenancy at will, is a personal arrangement between two parties and does not create a legal estate in land. The difference between a tenancy and a licence is that a tenancy grants a tenant exclusive possession of the property, whereas a licence is contractual permission for the licensee to do certain things on the licensor’s property. Typically, a licence will expressly state that the licensee does not have exclusive possession and that the licensor can relocate them to other parts of the premises on very short notice.

Licences are often used for car parking spaces, retail concessions, serviced offices etc., where the licensee does not necessarily have use of a specific space or premises.

Labelling an agreement as a licence does not necessarily mean that the court will find that the arrangement is a true licence rather than a tenancy. The difference between leases, licences and tenancies at will have been the subject of an enormous amount of case law. If you are not sure which of these categories your arrangement falls into, then please get in touch.

A periodic tenancy of commercial premises cannot be excluded from the provisions of the Act. It is quite rare in today’s market for commercial parties to agree expressly to enter into a periodic tenancy and we see these arrangements more commonly when they arise by implication. This can happen where a tenant has remained in occupation after expiry of its contracted out lease, or where the parties never entered into a formal agreement to document their relationship at all.

Landlords can also terminate an implied periodic tenancy, though they can only do so in accordance with the provisions of the Act. This means that a landlord would have to serve notice to quit on its tenant and a section 25 notice under the Act. The period in the notice to quit would be calculated by reference to the period of the tenancy and the minimum notice a landlord can give in a section 25 notice, which is six months.

The case of Barclays Wealth Trustees (Jersey) Limited v Erimus Housing Limited [2014] EWCA Civ 303 is an interesting illustration of the difficulties which can arise where a tenant remains in occupation of its premises after the expiry of a contracted out lease.

Erimus Housing was the tenant of office premises and remained in occupation for almost three years after the expiry of its contracted out lease. During that period, Erimus Housing and its landlord Barclays engaged in negotiations for a new lease, although these were "desultory and lacking any impetus".

Erimus Housing decided to vacate the premises and gave notice to Barclays on the basis that they occupied the premises under a tenancy at will. Barclays sought to argue that Erimus Housing occupied under an annual periodic tenancy and therefore needed to give at least six months’ notice expiring at the end of the period of the tenancy. If Eriumus Housing was correct then the lease terminated on 28 September 2012, but if Barclays was correct then the lease could not terminate before 31 October 2013 and Erimus Housing would be liable for more than a year of rent, service charge etc. while the tenancy continued.

We anticipate that temporary and/or undocumented arrangements are likely to come under greater scrutiny in a difficult economic climate. In a rising market a landlord may be willing to waive notice requirements and break conditions to allow a tenant to leave where it is redeveloping a site or re-letting the premises at a better rent. In these uncertain times however, landlords will want to ensure that any exiting tenants give the correct amount of notice and in the appropriate format to avoid unnecessary rental voids. Therefore it is more important than ever for tenants to understand the basis on which they are occupying their premises and how to terminate these arrangements effectively.