Life Sciences A to Z - E is for Enforcement

Life Sciences A to Z - E is for Enforcement 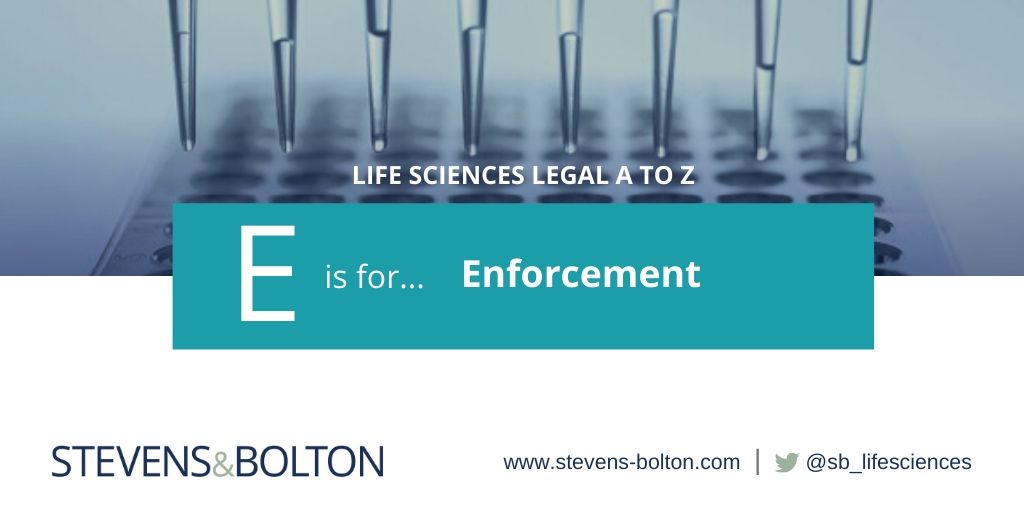 A key question for life sciences companies conducting international business is: will they be able to take enforceable action against a defaulting contract partner or licensee based overseas?

Contractual disputes between companies based within the UK are usually dealt with by the UK’s domestic courts, if they cannot be resolved by negotiation or other methods of alternative dispute resolution such as mediation, first. However, life sciences companies also regularly enter into international contracts including collaboration, licensing, supply and distribution agreements. How disputes under international contracts can be formally resolved will depend on the contract drafting, the nature of the dispute and the domicile of the parties. This can be complex.

We have already looked at arbitration in our Life Sciences A to Z series (see A is for Arbitration). Essentially, if you may need to enforce a contract internationally, agreeing to arbitrate any disputes which arise may well be the best option as arbitral awards tend to be easier to enforce overseas than the judgments of national courts. This is because the UK has signed up to the New York Convention, along with 160 other countries from Afghanistan to Zimbabwe (including the USA, China and Russia). Once an arbitral award has been issued, if the losing party does not comply, the successful party will need to present the award to the national court concerned for recognition and enforcement. While this process can take some time, the grounds for refusal are very limited, for example, if the recognition or enforcement of the award would be contrary to the public policy of the country concerned.

We do not expect the UK’s position in respect to the New York Convention and arbitration more generally to be affected by Brexit.

As regards court judgments, enforcement within the EU has long been governed by the Recast Brussels Regulation or its predecessors. This will no longer be the case following the end of the Brexit transition period. Instead, the UK intends to accede in its own right (as opposed to as a member of the EU) to the Hague Convention on Choice of Court Agreements. The Hague Convention will make it easier to enforce a court judgment obtained in a country which the parties have nominated in an exclusive jurisdiction clause, if both the nominated country and the country in which enforcement is sought are parties to the Convention.

The Hague Convention has already been ratified by the EU, as well as Singapore, Mexico and Montenegro.  Accordingly, even after the Brexit transition period, it will still be easier to enforce, for example, an English judgment elsewhere in the EU if the parties have agreed an English exclusive jurisdiction clause, because the EU is also a party to the Hague Convention. This assumes the UK does accede to the Convention in its own right in due course.

Where there is no exclusive jurisdiction clause, the Hague Convention will not help. A new treaty may eventually do so. Announced on 2 July 2019, the new 2019 Hague Judgments Convention will allow easier enforcement of national court judgments in other countries who are parties to it. It has been described as “modern and innovative” and a “game changer”. The details of the new Convention are outside the scope of this overview note, and it will take many months at least before either the EU or the UK sign up to it, but in time it should improve the enforceability of UK court judgments post-Brexit. It is hoped that, eventually, the new Convention will have global reach.

For now though, the position outside the EU can be complex and arbitration should always be considered as a dispute resolution mechanism. If the parties decide to nominate the courts of a particular country instead, advice should be sought as to whether a judgment of that country could be enforced wherever the counterparty’s assets are located.

Essentially, life sciences companies should always consider the position at the outset when a new international contract is being prepared and negotiated. Issues of jurisdiction and enforcement should be reviewed on an individual case by case basis depending on where the counterparty and its assets are located to ensure that the prospects of resolving any disputes and enforcing judgments or awards are maximised. These questions are often treated as a standard boilerplate, but careful thought should be given to them when the contract is drafted.