Five point guide: it's all in the Head(s)...of Terms

Five point guide: it's all in the Head(s)...of Terms 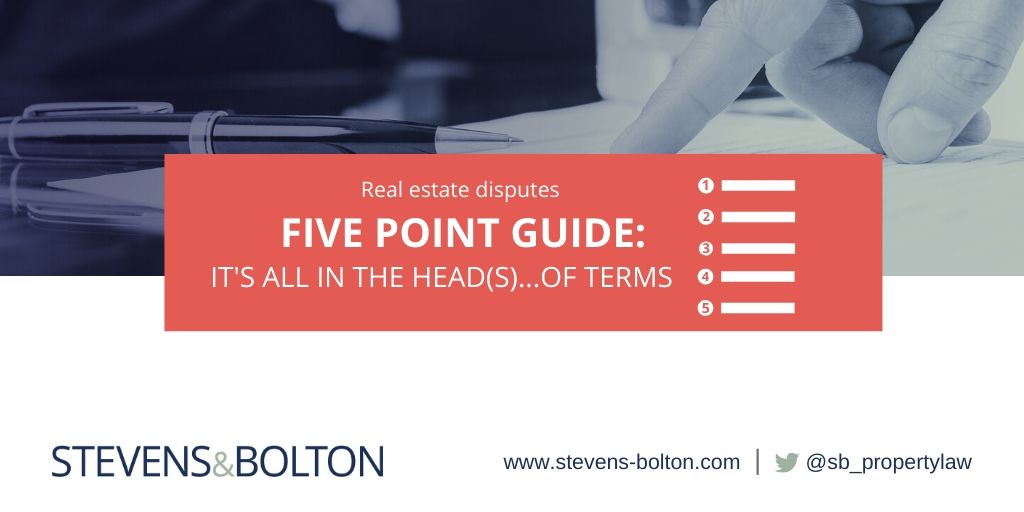 Parties, or their advisors, commonly agree Heads of Terms before documenting a property contract to help clarify the key components of the deal and ensure a smooth transaction.

When drafting Heads of Terms parties should, therefore, bear in mind the following 5 key points to avoid matters unravelling later:

Properly documented Heads of Terms do not carry any real legal weight. However, Heads of Terms agreed in ‘open’ correspondence can still be disclosed to a court and used in evidence to challenge a particular standpoint.  For example, agreeing a level of rent in a lease renewal could, if not protected by ‘without prejudice’ privilege, be difficult to move away from if the matter came before the court.  The terms may also carry some moral weight making it tricky for one party to justify a subsequent change.

Parties do not typically intend Heads of Terms to be legally binding, just a helpful framework to help parties and their advisors to document the deal.  However, ingredients of a binding contract for a disposition of an interest in land might exist if the Heads of Terms meet the legal test for a contract, namely offer, acceptance, intention to create legal relations and consideration passing between the parties. Additionally, they will have to satisfy section 2 of the Law of Property (Miscellaneous Provisions) Act 1989. Section 2 requires dispositions of an interest in land to be in writing, incorporate all the terms and to be signed by both parties.  This can be problematic because Heads of Terms which meet the test could amount to a legally binding document, whether or not parties intended this to happen.

To avoid costly arguments, marking the Heads of Terms ‘subject to contract’, including an express provision that they are non-binding, will act as a strong presumption against an intention to create a contract.

There is no standard form of Heads of Terms, but it is advisable to have them drawn up by experienced surveyors or solicitors, no matter how complicated the deal.  Development agreements may require greater attention to detail than a straightforward lease renewal, but each should be given equal care and attention.  If the terms do not reflect the parties’ intentions, the deal could unravel and tarnish commercial relations, especially if a dispute arises.  Yet Heads of Terms should not be too detailed either such that progress is stymied before parties have agreed the principal terms.

Agreeing who pays for the drafting and negotiation of documents should be clarified at the outset to avoid unnecessary misunderstandings later.  Parties usually agree to bear their own costs, but who pays will ultimately depend on the particular transaction and the relative commercial bargaining strengths in play.