James specialises in private wealth disputes, dealing with trust, estate and succession matters within the UK and internationally. James also deals with disputes where trusts and private wealth issues are involved in wider commercial disputes, such as fraud and asset recovery.

James advises on claims by or involving estates and trusts, most commonly involving high-net-worth and ultra-high-net-worth individuals. He acts for executors, trustees and beneficiaries, and also specialises in advising on claims under the Inheritance (Provision for Family and Dependants) Act 1975.

James also has a substantial practice advising on claims overlapping the trusts and family court jurisdictions, dealing with trustees and beneficiaries who have become involved in divorce proceedings and on issues arising from the enforcement and implementation of ancillary relief orders made in divorce proceedings.

James was shortlisted as “Partner of the Year” at the Citywealth Future Leaders Awards 2019, and has been named as one of Legal Week’s Private Client Global Elite “Ones to Watch” for the last four years. James has also been shortlisted in the “Litigation Rising Star” category at the British Legal awards 2020.

He is ranked as a Tier 1 individual in the Chambers HNW directory 2020, and as a “Next Generation Partner” in the Legal 500.

James was also named in the Spears 500 as a leading advisor outside London.

James is a committee member of ConTrA, the Contentious Trusts Association. 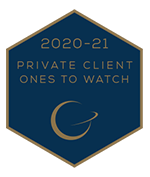 "You really value his brain. He is quite charming, and good to work with as well." CHAMBERS HNW 2020

"James is a very diligent lawyer...he has extraordinarily good insight in the private wealth/commercial cross-over which is where his work is based" CHAMBERS HNW 2020

James Lister
View more
We use the following cookies: